Press Releases
Multifamily
Workforce Housing
MassHousing Closes on $2.8 Million in Financing for New Workforce Housing in Northampton
The 12-unit 35 Village Hill Road is being developed by The Community Builders and Valley CDC as part of the redevelopment of the former Northampton State Hospital
April 29, 2020 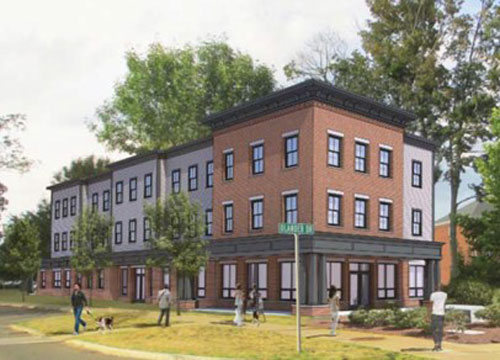 BOSTON – April 29, 2020 – MassHousing has closed on $2.8 million in affordable workforce housing financing to The Community Builders for the ongoing construction of the 12-unit 35 Village Hill Road in Northampton. Valley Community Development Corporation is the project co-sponsor.

The new housing, which is being developed on the site of the former Northampton State Hospital, will feature 10 workforce housing apartments for moderate-income households and two deeply affordable units for clients of the Massachusetts Department of Mental Health (DMH).

"MassHousing is pleased to support The Community Builders and Valley Community Development in their transformation of a vacant lot into new homes for working households and residents in need," said MassHousing Executive Director Chrystal Kornegay. "We’re happy that these new homes will serve working and disabled households for many years into the future."

"The Community Builders is excited to once again be expanding housing opportunities at Village Hill in Northampton. Our organization is committed to building strong communities where all people can thrive. We are grateful to MassHousing and our other state and local partners who help us make this work possible," said TCB Director of Development Rachana Crowley.

The 12 new apartments will be contained in one building, which will also have first-floor commercial space. Ten of the apartments at 35 Village Hill Road will be workforce housing units affordable to moderate-income households. Six of the workforce housing units will be deed-restricted for households earning at or below 120 percent of the Area Media Income (AMI), and four will be workforce units for households earning at or below 80 percent of AMI. Additionally, two units will be deeply affordable for DMH clients and will be supported by federal Section 8 project-based vouchers. The AMI for Northampton is $76,000 for a household of four.

In addition to the MassHousing financing, the Massachusetts Department of Housing and Community Development (DHCD) is providing the project-based vouchers and $1.5 million in direct support. The project also received $1.3 million in funding through the Community Scale Housing Initiative (CSHI), a joint initiative of DHCD and MassHousing that funds smaller-scale affordable rental developments.

The general contractor is Western Builders. The architect is Davis Square Architects and the management agent is TCB.

MassHousing has financed five rental housing communities in Northampton totaling 642 units of housing with an overall original loan amount of $33.4 million, and the Agency has also provided home mortgage loans to 427 homebuyers and homeowners with an original purchase principal balance of $31.2 million.

About The Community Builders

The Community Builders, Inc. (TCB) is one of the largest and most accomplished nonprofit housing development organizations in the nation. They started in 1964 as South End Community Development by renovating abandoned apartments in Boston’s South End. With properties in the Northeast, Midwest and Mid-Atlantic regions, TCB has grown to over 500 employees across 14 states and the District of Columbia. TCB is passionate about facilitating thriving neighborhoods and resident success. Their deeply rooted values drive the projects they pursue and the solutions they recommend. They also inform their philosophy about design and their focus on corralling resources andvpartnering with others to support. Since 1964, The Community Builders has constructed or preserved hundreds of affordable and mixed-income residential communities and pioneered the Community Life (CL) model for resident success. Today, anchored by offices in Boston, Chicago, Columbus, New York and Washington, D.C. they own or manage 12,000 apartment homes. For more information about TCB please visit www.tcbinc.org.

28 Austin Street has been completed along with retail space, a public plaza and playground, and a reconstructed municipal parking lot

MassHousing has closed on $1.3 million in affordable workforce housing financing for the new, 68-unit 28 Austin Street in Newton.